Is Emotional Intelligence Important in the Workplace? 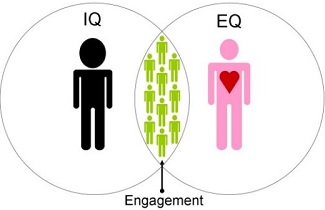 For years we’ve known of and used intelligence quotient, or IQ as the measure of ones mental abilities. In the recent years there is a new factor that promises to more accurately predict person’s success in life and business. It is called emotional intelligence but is it really all that it promises to be. Here is how Wikipedia.org describes it:

Emotional intelligence (EI) is the ability to identify, assess, and control the emotions of oneself, of others, and of groups.

Now, I did a course recently that basically settles the argument whether EI is or isn’t important in the workplace. It basically says that once IQ threshold that a person is normal is reached, IQ only remains 4 to 25% important in determining ones success in their career and EI takes over as main factor in job success – but how?

In order to be successful around other people you would have to work on your own personal abilities first. These include

Every experience you have evokes an emotion, fear, happiness or contentment. Particular part of the brain controlling this in humans is called amygdala – it acts as a radar to tell us if something is wrong or not. Amygdala uses this information to make a decision based on what’s commonly known as ‘gut feeling’. It is a fine art to balance feelings with facts.

Definition of blind spots is to stifle or make inaccurate self-understanding and self-assessment. Here are a few examples of blind spots:

People lacking confidence don’t trust their own judgement and if someone disagrees, they give up easily. They rely on the opinion of others even if their opinion is of better evidence, they avoid small risks and possess no self assurance to bounce back from mistakes so they avoid anything outside their safety zones.

If the risk of not speaking out is greater than the risk of speaking out, go over your bosses head if that’s what it takes to avoid disaster – stick to your view and decisions and recommendations, don’t cave in.

Control (not block) your emotions and impulses, there is nothing wrong in having bad emotions, it is how you deal with them and turn them into positives. Manage your moods, remain neutral and calm under attack. (Plan ahead, reherse a meeting with someone who makes you emotional; Count to 10 before you speak, think before you say something; Ask for help, ask someone to check your work before submiting to get better). Think of the consequences before you act (impulse control). Be reliable.

Be frank, admit a mistake and never hesitate to ask for help; build trust and follow through.

To succeed and survive you must change with environment’s changes; be adaptive or you will fall behind. Change to change, innovate and be creative. To be innovative you will seek information, research, talk to customers and figure out their needs – no idea is bizarre, brainstorm! Crazy ideas today are lucrative products tomorrow.

Take calculated risk. What is calculated risk? It is when you way potential risk and weigh them against rewards to be able to make the final decision.