NBN – What they don’t want you to know about this ‘new fast Internet’? 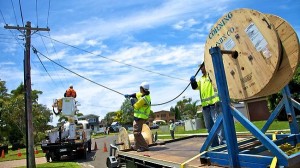 SYDNEY – About 400 of the almost 3000 staff at NBN Co are each being paid more than $200,000 a year, according to an Australian IT report. Collectively they are scoring more than $80 million a year.
On top of that, between the time NBN Co was set up and this year’s September election, NBN Co spent $152 million on consultants, raked up a legal bill of $111 million and spent $34.4 million on travel, the Oz says.

These costs were uncovered by the NBN Co Strategic Review, a redacted form of which was published this week. Consulting firms Deloitte, KordaMentha and the Boston Consulting Group collectively pocketed $8 million to help compile the review, the Oz says.

NBN Co executive chairman Ziggy Switkowski has pledged to “reign in” costs of NBN and Comms Minister Malcolm Turnbull has suggested that “some right-sizing” is likely to occur. Presumably both are willing to take lesser salaries in the national interest.

In my personal opinion, NBN is a white elephant that is just too expensive and fast Internet should be left with the private sector and market forces and not the Government – why create another Telstra and call it NBN, history seems to be repeating.