Answered: The new iPhone vs the latest Samsung Galaxy – which one do I get? How to view your Facebook events in your Outlook.com, Hotmail or Live.com Calendar?

Stop researching, data is out – the Only 2 things that will bring Google traffic to your website

Certainty? In this world nothing is certain but death and taxes.
― Benjamin Franklin

If there is one field of life where this most certainly applies, it is in the world ruled by Google – the world of internet marketing and in particular Search Engine Optimisation (SEO). Google has moved the goal posts so many times that it would be impossible to keep doing the same thing over and over again and expect same, not different but merely the same results. Small and large businesses and people looking after their SEO had to keep innovating and reinventing themselves to stay on that all important search engine results page (SERP) – and even then, nothing is guaranteed.

So, what works nowadays and what doesn’t? Following the money trail, it would be fair to say that it would be in Google’s interest to have everyone pay for privilege of showing up on their first page. This would especially be true for so called ‘money keywords’ or phrases that have high commercial intent. A person searching for ‘how to change a tap’ is clearly not looking for what a person typing in ‘plumbers Sydney’ is searching for. Second person is ready to hire someone for a fee, this person has already pulled their credit card out and is deciding which plumber to chose.

These are the only 2 ways to show up on the first page of Google and I will reveal to you what the best way currently is. This photo shows you the eye tracking study that basically shows you where people are looking when doing the Google search. Purple x-marks is where people are most likely to click (and are clicking) and red lines are showing you where various screen resolutions cut-off. The heat is where your eye is and most of them are where Google AdWords results are. 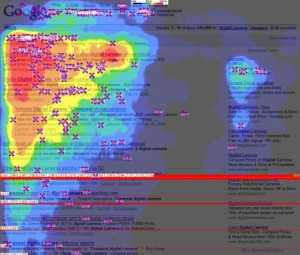 So looking at the heat map, it’s clear that Google paid Ads are in the prime location and despite old belief that people don’t click on paid ads, research has shown that over 60% of people making searches on Google don’t even know the difference between paid and organic listings. Call it ‘Google wins’ or what have you – you must be on Google paid network as that’s where the eyeballs are and that’s where people click. Organic results have ever so slightly been pushed below the fold (bellow those red lines) meaning that people need to scrawl down to see your result there even if you’re in the top 5 organic results.

Another important question is – ‘should I be in paid results if I’m already ranking in the organic results?’ The answer is yes as study has shown that when Google AdWords campaigns are paused while a website is ranking organically, traffic drop off is much more significant and loss equates to 89% incremental points.  If you want to find out more about that study click here.

Here are some of the statistics that speak for themselves.

To conclude – if you’re doing everything Google wants to see to place you on the first page of organic (‘free’) results – great! However, you must be on Google AdWords or you’re missing out on valuable and targeted leads.

2 Responses to Stop researching, data is out – the Only 2 things that will bring Google traffic to your website