Improving Business Processes using Lean Six Sigma methodologies – Explained Stop researching, data is out – the Only 2 things that will bring Google traffic to your website

Answered: The new iPhone vs the latest Samsung Galaxy – which one do I get? 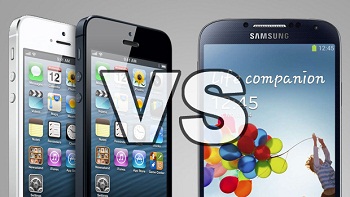 There had been masses of blog posts written comparing iPhone and its operating system iOS to many Android devices like Samsung Galaxy S4, however as an ordinary user most people want to know – which one is best fit for me, which one do I buy? He’s my advice from my own experience.

I’m not going to throw all the technical information and specifications as to how many millions of times commands are executed by ‘the new’ super-duper-many-core CPU, instead I’ll share my findings to questions such as how long’s the battery life, will I be able to get the same applications if I switch, what about my existing data, contacts notes, emails?

I didn’t do too much research before I switched from the iPhone 5 to Samsung S4 4G, I thought I’m technical enough and I should be able to get any phone work for me with few tweaks – well, I was right.

What I found however is that iPhone device together with it’s operating system iOS works better out of the box. With Galaxy and I can confidently assume with most other Android smart phone manufacturers like HTC, LG or even Google’s own Nexus, you would have to make few essential changes to make it intuitive and user friendly enough.

What am I talking about – well, for example I had to download Google Keyboard to be able to use the keyboard as the build it Samsung keyboard is stupid to be perfectly blunt. Also, when I connected my Hotmail account and downloaded all the contacts, they got recognised but the profile photos that were imported from my contact’s respective profiles were low resolutions and looked awful. So I had to download another great free app called Sync.ME. Shared it with few people and their feedback was positive as well. Sync.ME downloaded and matched my existing contacts with their Facebook photos with great speed, ease and clarity.

What I like about the Galaxy is the flexibility that Google’s Android operating system gives it – you plug the phone into your computer via USB cable and there it all is – the file system folders with your music, photo, video files that you are free to copy back and forth unlike the iPhone where this would only be possible if the iPhone was jailbroken and you really don’t want to do that.

So, if you’re slightly technical and/or like to download videos and watch them on a bigger screen (5 inch compared to iPhone’s 4 inch) and move them between your smart phone and computer freely – get yourself an Android phone like Samsung Galaxy range. This especially comes into play when you consider that Galaxy has an expandable memory slot to store those photos and videos on whereas iPhone doesn’t.

What I like about the iPhone is that it works well and satisfies requirements of most people off-the-shelf – no major tweaking needed. So if you’re one of those people who say ‘I just want to make calls, send messages and possibly emails with no fuss’ – get yourself an iPhone. This is not to say that the iPhone doesn’t have many advanced features, however it is more intuitive, user friendly and smooth.

Battery life is pretty much the same so no winner there – it’s pretty average for both devices. Both operating systems have loads of apps so you will always be able to find the equivalent app that you used before.

Few more things to consider – iPhone will set you back couple of hundred dollars more and just UPDATED: after using the Samsung Galaxy S4 4G for few extra weeks, my advice is: just get the Galaxy whoever you are, make the above tweaks and you’ll love it’s large screen and customizability.